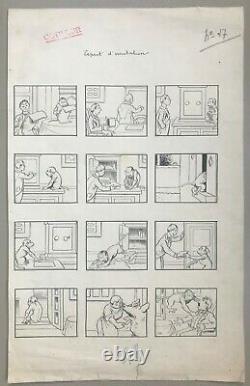 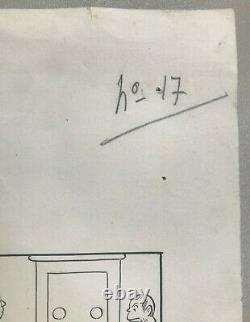 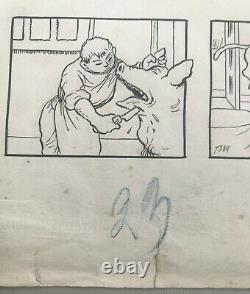 Benjamin rabier (1864 - 1939), French cartoonist. Original board in china ink on paper, 42,3x26,8 cm, entitled "Imitation spirit", red stamp "Colour" at the top left, numbered 17 to the right of the title. This board could have been called: when the monkey imitates the man. Terrible satirical scene, tinted with black humour, between a monkey and his master imitating him in his daily life, rendering him various services, until the day he sees a butcher slaughtering a pig, he then grabs a knife and kills his master by "spirit of imitation". Ruffled paper at the bottom, good overall condition. Benjamin rabier is considered one of the major animal designers of the 20th century. He is and remains famous for the creation of the cheese logo "the laughing cow", and for his iconic character of duck gideon. He has also successfully illustrated the fables of the fountain, the buffalo's works, founded the pêle-mêle, an all-out menagerie of familiar animals. The two great figures of the comic strip, walt disney and hergé, were very inspired by its universe.

This item is in the category "Books, bd, magazines\bandes dessinées, comics, products derived\illustrations, original boards". The seller is "cyril2472" and is located in this country: en. This item can be shipped to the following country: whole world.