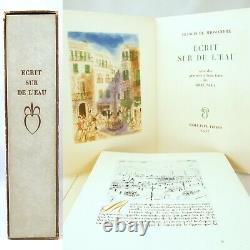 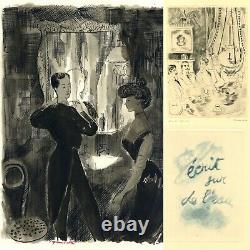 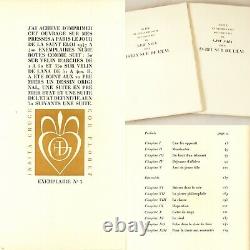 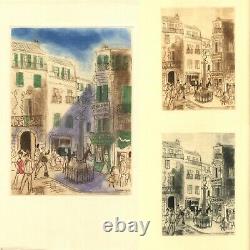 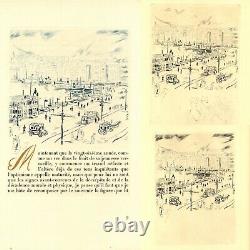 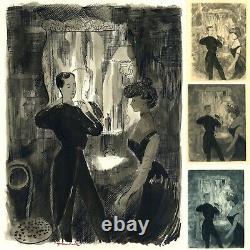 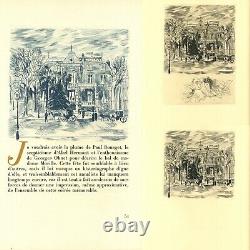 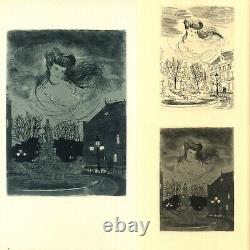 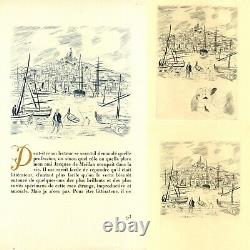 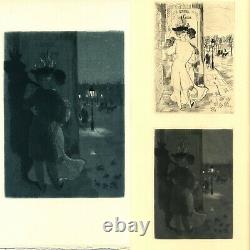 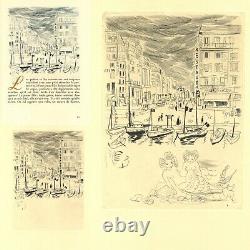 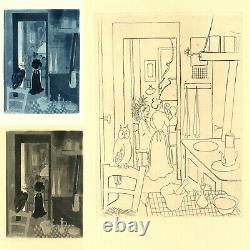 Francis de miomandre, written on water, with engravings with grau sala, bets, émile-paul brothers, 1947, 266 pp. In illustrated undercover sheets, case and nesting editor. Cover, frontispiece in color, 30 illustrations in blue in the text: 15 brass in full page - 15 header. All the brass, in relation to the title of louvrage, are drawn in shades of blue: midnight blue, electric blue, overseas, indigo, navy, sapphire. Draw limited to 400 numbered copies: 50 on vellum darches from 1 to 50 and 350 on vellum of lana from 51 to 400.

The first 20 were attached an original drawing, a first-state suite and a sequel to the final state, to the next 30 a sequel. Our copy is number three in the head print. It contains as advertised to the colophon. 1 original drawing with a chinese face.

Signed in red, by hand, by grau sala. This is the original drawing of the 4th plank, p.

A board refused with the mention. \"refused board\" and the. Hand signature of grau sala. In grey pencil, not reported to the colophon. Written on leau was published in 1908, with a record of five hundred copies by a Marseille house: the fire, directed by Émile Sicard. The novel was awarded the same year with the goncourt prize against henri barbusse, amédée rouquès and jeans violis. When the verdict fell signed by the hennic leon, president of the academy, only a few dozen of the copies remained that sold within an hour. Sicard and his printer rushed to paris determined to drown the booksellers of the new edition of this unexpected goncourt. But ill-equipped and so happy to discover the charms and pleasures of the capital to which they melted, they did not find time for this reprint. When the volumes finally came out of the press, it was too late. Miomandre admits, without any regrets or grudges, that it took more than seven years to sell the three thousand copies he had planned for his glory.

The novel invites us to follow the sentimental learning of the young jacques de meillan (alter ego of miomandre francis) in the marseille of the little dawn of the xx. The theme is playful and the writing, light and without any blistering style, gives off to his reading an old-fashioned and vaporous charm. A kind of small eulogy to the youth and love of a very young man whose sap runs through body and spirit of bubbling desires. In the foreword, miomandre warns his readers at the time: \"It requires no effort to be read.

Whether you open it through the middle, it will be as intelligible to you as if you address it in the first chapter. Like eternity, it has no beginning or end, but it is less long.\" André puzzled, in the new French magazine, notes about writing about water: \"What tone to talk about this light book? Light as a bubble, inconsistent, bizarre, it evades criticism and seems constantly in formation.

It could be unbearable; He's charming. Exceptional set in excellent condition. Sumptuous illustrations and original drawing signed from grau sala. Sending very neat, with follow-up and insurance, all over the world.

The illustration photos of the ad show the 3 states of a selection of boards and the 4 states for the one with the original drawing in Chinese ink. The item \"miomandre grau sala written on water No. 3/20 original denied board design\" has been on sale since Friday, March 26, 2021. It is in the category \"books, comics, old books, collectibles\".

The seller is \"librairiealademilune\" and is located in gallargues le montueux. This item can be delivered anywhere in the world.