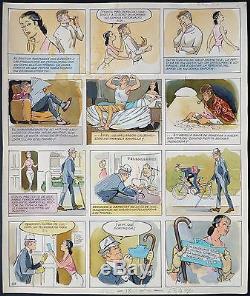 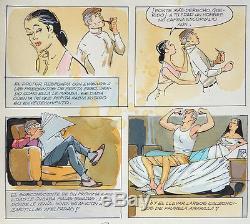 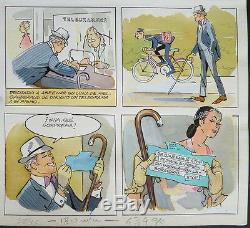 At the end of the 1940s, he sexed in France, where he pursued a career as a comic book author and comic cartoonist. We find his signature in france evening, paris-press, intransigent, the evening, point of view and days of France. His most famous series are \In the mid-1950s, rooster began his collaboration with rené goscinny by publishing in France days \The board: \Original board in Indian ink + watercolor + gouache. Texts in Spanish (the texts in French were put on a layer that has disappeared). This plate was published in the n ° 920 of days of France (1972). Size: 35.7 x 29.8 cm. Warning: the scenario of this story is of cock (goscinny having stopped writing the scenarios of this series around 1969). The doctor gaudamus is a scientist who, having developed the elixir of youth, administers himself in doses of such force that he falls back into childhood. Only the nymph, her brunette wife, knows the secret of her husband, who keeps intact his exceptional intellect in an infant body. Playing on the ambiguities of the situation, mixing police intrigue and humor, Goscinny multiplies the misunderstandings and makes the most of the drawing of cock, which is meant to draw very pretty women. Provenance: sale of the rooster workshop in drouot. Hand delivery possible paris 9th. The item \The seller is \This item can be delivered anywhere in the world.
penigorwomanoriginalmanaraoriginalsbandinkcoverdrawingscoplanplanchesyearsdedicationsignedillustrationcolorrarespiroutintindrawingtributewatercolorwithboardplatenudeplankpencilpageironingforboardsbeautifulstate