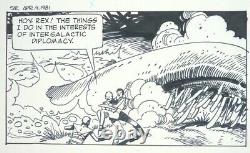 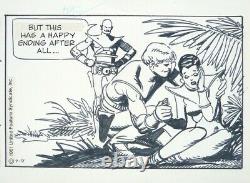 He worked mainly for the 2 major comic publishing houses: marvel and dc. Over the years, he drew almost all heroes (superman, spiderman, green lantern, the atom,). From 1970 he made numerous covers of comic books. He was also an innovator in creating several experimental series, including unmistakable blackmark. He is considered one of the masters of the American comic strip. Daily strip of April 4, 1981. Drawing and inking of gil kane. Format: 15.3 x 44.3 cm. Self-handling possible at 9th bets.

The item "star hawks daily strip original drawing of gil kane" has been on sale since Saturday, December 4, 2021. It is in the category "Books, bd, magazines\bandes dessinées, comics, products derived\illustrations, original boards". The seller is "original drawing" and is located at/in bets. This item can be delivered anywhere in the world.