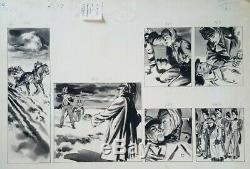 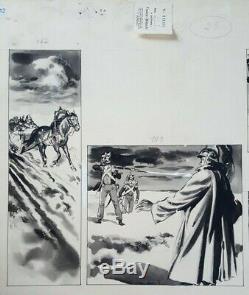 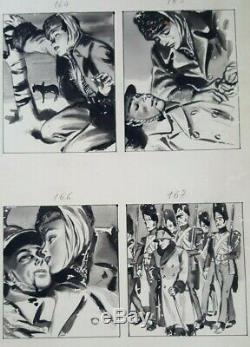 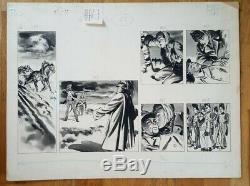 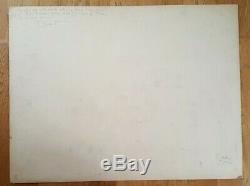 Great original comic book board. Represents scenes of war with Napoleon 1st for the magazine France-Sunday. Authenticated at the back by his wife in 2010. Size 64 x 49 cm.

Three major artistic periods can be identified in the life and work of pierre-laurent brenot. He was first stylist of fashion for the greatest Parisian couturiers of his time (dates): yves saint-laurent, dior, nina ricci, balmain, lanvin, fashionnable ... It is during this period of hard work that he will sharpen his gesture through drawings representing mostly the clothes and underneath the body of the nascent woman.

The next period is the one that will bring him his fame and nickname \He will create the famous pin-up of lido which will become the brand of the cabaret during several decades. This pin-up is still present on the objects sold at the lido shop. The casino of Paris with all the magazines of line renaud the madnesses shepherds were also these customers. He also worked on the production of a movie poster: \, 1959), \author of the famous pin-up dressed / undressed, inset double page paris flirt magazines, paris hollywood. Much of his work was devoted to advertising.

This led him to work for the greatest brands of his time: jesos, chantel, vitelloise, lustucru, bougeois, kodac ... During this time he will strive to sublimate the body of the woman. His gesture will become increasingly light, airy and will force the admiration of his colleagues. Some gruel that will admit to resort to certain artifices in order to realize its works, whereas Pierre-laurent, according to the words of the latter, drew the entirety of a canvas without recovery, nor cut. The arrival of the cameras forced the poster artists to reconvert themselves. Pierre-Laurent Brenot did not escape the rule and his choice was on the oil painting.

He began to study the techniques of the ancients, including Velasquez or Greco. He then began to use the technique of grisaille: the canvas is first made in gray, then is enhanced with colors. This gives more depth to the canvas, the effects of shadows and light are highlighted.

Important: in case of hand delivery, thank you to inform me the day before because the drawings are not stored at the gallery! The item \The seller is \This item can be delivered anywhere in the world.