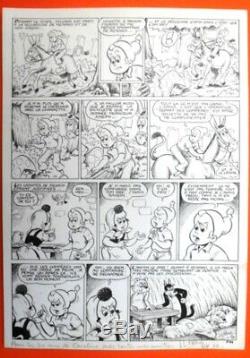 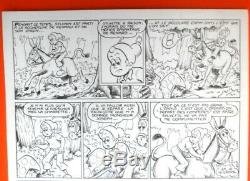 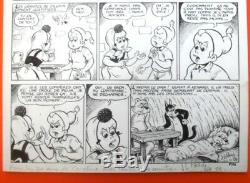 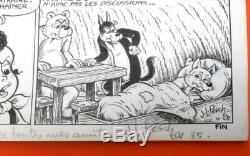 This original ink was designed by. A little bit of history. He enters the press child in 1954 nasturtium newspaper and worked in several newspapers (Mireille, lintrépide, bernadette, brave hearts, brave souls, and fripounet Marisette, peregrine, Tintin journal). Its main heroes are, among others, nouni, pinpin, yoyo, couinou, squeak, pik-pik hedgehog, Perlipopette and sacripan, on after a da2 issue, and many of stories of animals in collaboration with Henriette ROBITAILLIE, with whom he created in 1964 a first version of beak-in-iron pilgrim.

As he draws pinpinville, a story inspired the novel renart, we think of him, in 1956 m of death. Cuvillier, who created and Sylvain sylvette in 1941 to complete two albums. Everyone thinks that the series will disappear with its creator, but Jean-Louis pesch idea was to travel and Sylvain sylvette worldwide spherical ball. Wonderful size: 45.5 x 32.5 cm.

Possibility to get a proposal. Payment by check or bank transfer. The costs are borne by the buyer. The item \original plates \The seller is \This article can be shipped worldwide.